Rangan Chatterjee is a GP and says he has seen plenty of evidence of the link between mental ill-health in youngsters and their use of social media.

One 16 year-old boy was referred to him after he self-harmed and ended up in A&E. "The first thought was to put him on anti-depressants but I chatted to him and it sounded like his use of social media was having a negative impact on his health." So Dr Chatterjee suggested a simple solution - the teenager should attempt to wean himself off social media, restricting himself to just an hour before he went to bed. Over the course of a few weeks, he should extend this to two hours at night and two in the morning. "He reported a significant improvement in his well being and, after six months, I had a letter from his mother saying he was happier at school and integrated into the local community." That and similar cases have led him to question the role social media plays in the lives of young people. "Social media is having a negative impact on mental health," he said. "I do think it is a big problem and that we need some rules. How do we educate society to use technology so it helps us rather than harms us?"

He is not alone. A group of US child welfare experts recently wrote to Facebook founder Mark Zuckerberg urging him to close down Messenger Kids - a messaging app developed for children - saying it was irresponsible to encourage pre-teens to use the platform. It cited evidence of adolescents reporting severe mood changes because of social media use and girls as young as 10 facing body image issues because of the pictures they are bombarded with on platforms such as Facebook-owned Instagram.

A 2017 study by The Royal Society of Public Health asked 1,500 young people aged 11-25 to track their moods while using the five most popular social media sites. It suggested Snapchat and Instagram were the most likely to inspire feelings of inadequacy and anxiety. YouTube had the most positive influence. Seven in 10 said Instagram made them feel worse about body image and half of 14-24-year-olds reported Instagram and Facebook exacerbated feelings of anxiety. Two-thirds said Facebook made cyber-bullying worse. The study led Shirley Cramer, chief executive of RSPH, to call for three specific changes:

She concluded: "Social media has become a space in which we form and build relationships, shape self-identity, express ourselves and learn about the world around us; it is intrinsically linked to mental health."

Consultant psychiatrist Louise Theodosiou says one of the clearest indications children are spending too long on their phones is their behaviour during a session with a psychiatrist. "Two or three years ago, it was very unusual for a child to answer their phone or text during an appointment. But now it is common," said the Royal Manchester Children's Hospital doctor. She has seen a rise in cases where social media is a contributing factor in teenage depression, anxiety and other mental health issues. These problems are often complex and wide-ranging - from excessive use of gaming or social media sites to feelings of inadequacy brought on by a constant bombardment of social media images of other people's lives, to cyber-bullying. 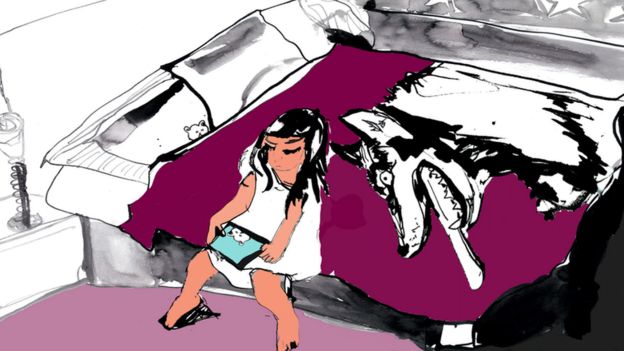 "In the last fortnight I have had two children request extra appointments because of online bullying,"

Dr Theodosiou told the BBC. "Some children deliberately lose or break their phones just to end distressing messages." Teenagers who dare to express alternative views, particularly about "diverse sexuality", open themselves up to the risk of a torrent of abuse on platforms such as Twitter, she says. And online bullying can have a more intense effect than playground taunts. "At school, any offline bullying would be limited to that environment but on the computer at home it begins to feel like you are being bullied in your own bedroom," said Dr Theodosiou. One of the groups she worries about most - one she describes as "thankfully, rare" - is children who have simply stopped going out because of their online addiction to social media, gaming platforms, or both.

Often such children will refuse to travel to psychiatrist appointments, so a range of professionals have to make home visits to deal with the issue. It can take months to persuade them to leave their bedrooms. "These kids are living in a fictional world, sometimes to the detriment of their physical health. They might have physical ill-health, like toothache, but they are still not wanting to leave their virtual worlds," she said. Dr Theodosiou has seen first-hand how difficult it can be for parents. She has heard of some sleeping with the home router to make sure the children cannot connect to the wi-fi in the middle of the night. Even for those children whose social media use may be judged normal, there are still dangers in the way the internet has become a conduit into the lives of friends and celebrities. "Youngsters have a need to compulsively watch others and are getting upset because they feel their lives aren't like that," said Dr Theodosiou. "My sense is that they think that their friends have better lives than them, even though they are just seeing an idealised version of others' lives."

What can parents do?

The UK's Department of Health met in November with tech firms including Snap, Facebook, Google, Apple and Twitter to discuss the issues, which it sees as:

Again there is plenty of evidence to suggest there is reason to worry about all three of these topics.

It should also be pointed out some studies suggest children cope well with integrating social media into their lives.

Despite the sometimes contradictory evidence, the firms have agreed to look at the three issues raised by the UK government, along with the possibility of parental controls, over the coming months. The BBC understands they have been asked to provide evidence of what they believe makes unhealthy online behaviour among 13-18-year-olds, whether that be long periods of time spent online or using the platform at unsocial hours. The government has also asked whether social media firms could provide pop-up messages alerting people who have been online for excessive periods and to give it specific examples. In response to the meeting, Facebook's head of public policy in the UK, Karim Palant, told the BBC: "Our research shows that when we use social media to connect with people we care about, it can be good for our well-being." Twitter said simply that it was "looking forward to positive discussions on these critical issues". Google did not want to comment publicly. And Snapchat said it was working on ways to improve how threatening messages are flagged by users. Apple, which also attended the Department of Health meeting, recently faced calls from its investors to act on smartphone addiction, with software limiting how long children can use their devices. In response, it said that there were already parental controls built into the operating system of its iPhones.

Regulating Emotion for Children with ADHD

Coping with Schooling at Home